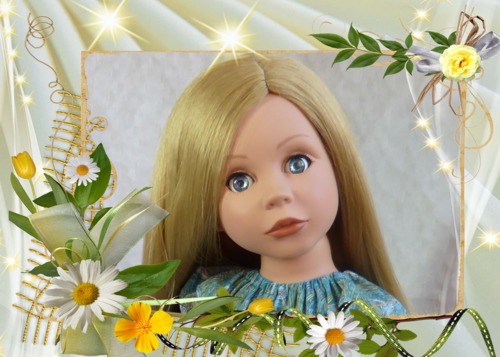 Rhiannon is one of the Bonnie and Pearl dolls, produced in Wales by a two-woman team and named after their childhood dolls, Bonnie and Pearl.  She is the first doll I’ve bought to obtain a particular colour season.  I wanted a Spring to add to my group of 18-19″ dolls of sturdy American Girl build, and I thought the blue-eyed blonde from Bonnie and Pearl might just have that Spring colouring.  Another selling point was that the dolls don’t have a full ragdoll body.  They have a shoulder-plate, which makes low necklines and strappy tops look great on them.

I have to admit that when they first arrived on the scene, I wasn’t drawn to these dolls.  Their features were very different from most 18″ play dolls, and I thought there was something not quite right about the eyes…  But as time passed I got used to the different look, and began to come round to them.  I dithered for quite a while, then cracked and sent in the order.  When she arrived I was disappointed at first.  Her arms and legs seemed a bit straight and stiff, her body was stuffed absolutely rigid, and those eyes…  were they slightly too small for their sockets?

But I was delighted to find that my new doll did indeed look great in the clear, warm colours of Spring, and her vinyl was very good quality.  She had a wonderful, thick wig, too, but it was rather greasy.  I took her upstairs to wash and condition her hair, slightly nervous in case it loosened her wig.  But no, all was well, the wig remained firmly in place, and her hair once dry was now wonderfully soft, silky and beautifully conditioned.  After a few days I realised I was rather fond of my Welsh beauty, to whom I gave the Welsh name Rhiannon.

I did make one fairly major modification to her.  Her body to me seemed over-stuffed and shapeless.  Her waist measurement was bigger than that of my 24″ Paola Reina ‘Queen’, Lidia.  This I felt would cause problems with the fit of garments sized for American Girl.  So I opened up the seam in her back and took out a fair bit of the stuffing, then slip-stitched her closed again.  Suddenly she had a waist!

A few days later I realised I really was rather fond of my distinctively Welsh beauty – with her pointed features and wide lips she reminds me rather of Welsh mezzo-soprano Katherine Jenkins.  Her legs, if a bit stiff, were long and shapely.  Her head tilted appealingly on her long neck.  Her hair was easy to style and of excellent quality.  I just needed to get her out of the her over-frilly, fussy meet outfit and into some Kit’s Couture in Spring colours!