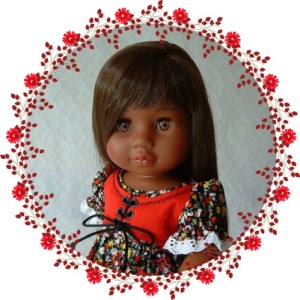 Jamila joined the Kit’s Couture team in early 2014.  She is one of the Soy Tu line of dolls from Spanish company Paola Reina.   Recently the doll has been marketed with the name of Amor, but when I bought her she was simply Soy Tu African doll so I was able to name her myself.  I chose the name Jamila which is used in North Africa, and which means ‘beautiful’ – which she is with her sweet round face and innocent expression.

Paola Reina clearly created this doll with North African ethnicity.  Unlike my childhood doll Susan, whose vinyl is the deep ebony black of sub-Saharan Africa, Jamila has a lighter brown skin and the straight black hair found in the north of the continent.  She does make a good companion for Susan.  They are a similar height, somewhere between 16″-17″, they both have amber sleepy eyes, and have a similar body shape.   Like Susan, Jamila has five swivel joints only and is all vinyl – a pretty traditional doll, in that sense.  But her vinyl has an attractive vanilla aroma, very unusual and a feature of Paola Reina dolls.  Also, unlike most dolls these days, she is made and dressed not in China, but entirely in Europe, something of which I heartily approve.

Jamila arrived dressed in a very striking outfit in bright Winter colours.  The skirt is made from a cotton print in yellow and hot pink, teamed with a pale mauve tee shirt and a cerise pink short-sleeved tailored jacket.  She wears mauve shoes and white socks, and a gorgeous hat in the same material as the skirt.  These colours suit her admirably and clearly her clothing season is Winter, so I look forward to dressing her in the really bright end of the winter palette.

Jamila’s hair is very good quality, but cut in a rather ragged layered style which means that it is not terribly amenable to restyling.  It responded well to being washed and conditioned, and has become very soft and silky.

It will be challenging to find more patterns to fit Jamila and Susan, so I may have to work on resizing my various 18″ patterns to fit them – an enjoyable and rewarding task.  I am very pleased with Jamila who is a charming addition to the Kit’s Couture line-up.